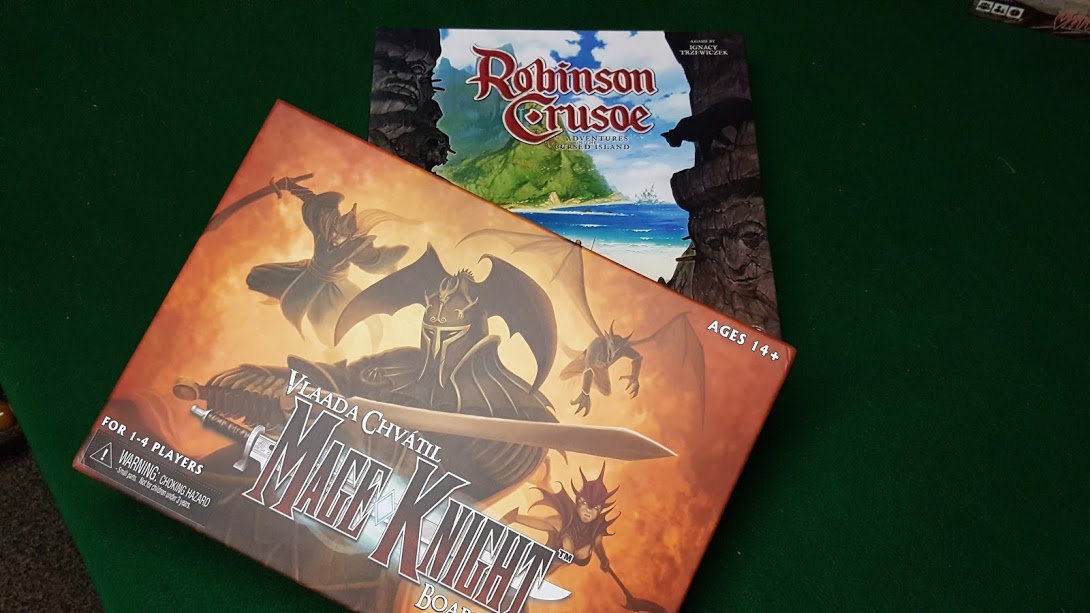 I had long separation from board games. In 2010, there was a flood in our basement which lead to a soggy collection of board games and comics. I leaned heavily on video games for my gaming urges. In 2015, I started listening to the DLC podcast. The host of the show,Jeff Cannata, has a segment at the end of the podcast called Tabletop Time. The 10 to 15 minutes of coverage is usually dedicated to board games games he is currently playing or the current events in the hobby. It’s because of Mr. Cannata that I began my search for board games. The first game I bought had to be a fantasy theme and a decent amount of replayability…… Along came Mage Knight. Ever heard of it? MK was and still is my favorite game. I could play by myself and be totally immersed in the gameplay, with many rule checks of course. Mage Knight taught me hand management, deck building, and tile placement. Thank you for bringing me back Mage Knight.

Board games, as you know, can get a bit complicated as your interest grows.  So I had to branch out until I could find a play group. I blindly bought a cooperative game called Big Book of Madness, which was a really interesting brain burner of a game.  I figured since I was an only child I could pull off any game 4 handed so give it a shot. Still, I had something closer solo games. I began to accept solitaire play as a niche market at the time. I craved another experience similar to Mage Knight were my choices early on could lead to very positive or negative outcomes towards the end.  Along came Robinson Crusoe….

I know Robinson Crusoe is not a pure solo game. It represents the type of game I really wanted, a game with solo players in mind. This was the game that taught me worker placement, the importance of theme, the agony and defeat of dice chucking, pressing your luck, and often harsh difficulty. It was all there in one game! Because of Robinson Crusoe I became an official gamer again. Both Mage Knight and Robinson Crusoe set the bar for “the best”, in my humble opinion. With two games in mind, I headed out to my local gaming store to find similar experience. I had no idea that I would like damn near everything in the store when I walk through the aisles. Thank you Ignacy Trzewiczek.

Solo and Coop games with be a major component of this site because it’s how I play most games outside of my playing groups. I am pleased with the idea that companies are considering solo variants and making more coop games.with So expect special attention to this category and your feedback will help me steer towards our common interests.

I hope you like what you read today. This site will grow as long as you grow with me. Feel free to comment below and hopefully you will jump on board and follow as well. Thank you for your time.

My question to you, what is your favorite solo game of all time? Something that comes to mind the second you read this question. What is it about the game that makes it your favorite?