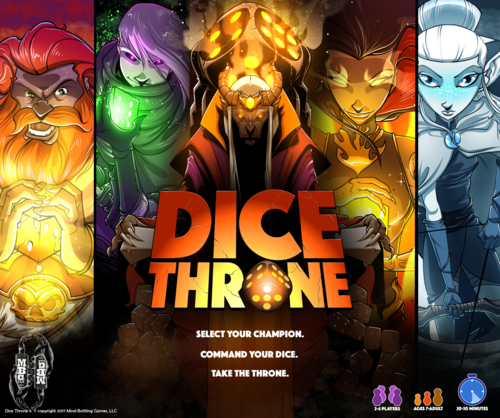 Aaaaaaah Memories. When I was around 10 years old, I would beg my mother for $10.00 to go to the mall. Yes, $10.00 got you a long way back then and supervision was VERY loose. After a bus ride across town and slice of pizza from Sabrraro, I was off to the arcade for a full day of Streetfighter, Mortal Kombat, Tekken, and Virtual Fighter. Those were the days, at least I think they were. Years later, Dice Throne appears out of nowhere to scratch the itch I had every Saturday. I’ll let you decide if Dice Throne is the right game for you.

Dice Throne has a plot similar to Mortal Kombat or Tekken. The Mad King invites six combatants to fight in a tournament. The winner gets the opportunity to face the Mad King for supreme power and for thousands of years no one has been victorious. Like all arcade fighting games from back in the day, you have to decide if lore is important to you or not. More information about the motivation and background is on the horizon.  Manny Trembley is the man behind the art in Dice Throne and it looks like he has a comic book or novel close to completion. I look forward to seeing the world more fleshed out.

I have to mention the level of quality in Dice Throne. The insert is is sooooooooo clean. Each character has their own compartment and custom components. It’s like opening a player selection screen in a fighting game. Dice Throne looks the part and feels the part. Take a look.

Dice Throne can be played one versus one, free for all, and team play (2v2 and 3vs3). Each mode can be customized and the manual provides options after you figure out the basic rules. I did not play team combat, but the rules make every mode easy to pull off and just as fun.

The heroes in Dice Throne have familiar character archetypes like the barbarian, pyromancer, and paladin. Each character’s deck has cards that are tailored to buff and upgrade their abilities, while others give the standard rerolls, draw cards, and free CP points. For example, the Pyromancer has cards to enhance her fire mastery. During a match she uses that fire mastery tokens to create an insane amount of damage. On the other hand, the Moon Thief has cards that cause multiple status effects so you don’t have to hit on all your rolls during the round. After one or two plays of Dice Throne I noticed each character has their own level of depth and strategy.

6 Characters available. All have to be played to their strengths or fights get one sided fairly quickly.

At its core, Dice Throne is a dice chucker with character abilities and hand management. During a round of play, each player will take turns generating combat points (CP), playing cards and rolling dice to active special abilities.

The pictures below give you a taste of a round of combat. The example is light on details about the phases of the game, but hopefully you get a general sense. Players usually start with 30 or 50 health, depending on if you’re playing a starter game or normal mode. You can customize or handicap the match as you choose. This scenario is in the mid game of a beginner mode.

My enthusiasm for this game stems from memories of old fighting games. I can tell how much love and playtesting was put into balancing this game. Every character pushes you toward playing to their strengths, which made a huge impression on me. You can’t play a Shadow Thief or Paladin as aggressive offensive characters, but eventually you find ways to pull off massive attacks. The combat is hard hitting and rarely are you left with nothing to do with your results. If someone hits their super power, the match can be crushing and it should be. Hand management and defensive rolls are just as important as hitting the “cool powers.”

Dice Throne has some minor issues. I can see potential buyers being turned off by a little luck-based dice chucking game combat game. Some gamers might blow off Dice Throne by labeling it as a King of Tokyo clone. Ugh…………….  While I respect the opinions of others, hopefully I shared enough to see the layers of gameplay. There is a bit of a learning curve for some characters like the Shadow Thief, Monk and Paladin. I believe some players will get pounced their first time playing based on character choice, which leads some people to disappointment. Pay attention to the complexity indicators in the manual and try some of the less complex characters. Lastly, I want more fighters! That’s not a real negative so let’s move on.

Dice Throne mashes all the right buttons. I want it on my table, I want tournaments, I want more! It’s easy to pop out and play with different groups and you can customize the experience to any size group. The arcade fighting game feel of Dice Throne is something I believe generated the buzz of the Kickstarter campaign. I’ve stumbled upon a couple events and a Face Book Community, so I can see a long game. There will be a Season 2 Kickstarter launching on February 14th with 6 additional characters, so who knows what else they have in store. About a month ago, Roxley Games partnered with Mind Bottling Games on Dice Throne and that means more content and quality based on their track record. I’ll leave you with this, Dice Throne stays in my collection. I didn’t know I wanted something like this in my catalog, but I want more of it now that I have it. I haven’t had one person I played with give a negative comment about the game. Having a comic book on the horizon is another selling point for me. I have a little comic book nerd in me and with the visual pleasing art already on display, hype achievement unlocked! I’m locked in and tuned in for more from Dice Throne. You can find more about the game via this links below and more about the Dice Throne Community as well. Thank you for your time.

Hopefully I helped you make an informed decision on Dice Throne. If you have any questions or comments feel free to share them.