Full disclosure: A copy of Shards of Infinity was provided by Stone Blade Entertainment for review. I would like to thank them for their support of Jambalaya Plays Games. I do not provide paid positivity or receive payment at all. Enjoy the content party people.

Shards of Infinity is a deck building game, created by two designers from the Ascension series. Most of the mechanics in this game are similar to Ascension and other deck builders like Star and Hero Realms. Shards of Infinity takes a slight step above its competition and it’s clear that the designers wanted to move in a different direction from Ascension. For veterans of deck builders, this review is steered heavily towards people who aren’t too familiar with deck building games like this. If you’re looking for exactly what’s makes Shards of Infinity different, scroll down to my “What’s so cool” video, positives and negatives, and my final thoughts.

In Shards of Infinity, each player takes the role of one of the four champions. Each Champion has 50 health and their Mastery level at zero. The characters aren’t asymmetric, so they all have the same purpose and actions. Of course, this seems like a perfect opportunity to add expansions and we all know more is on the way. Mastery is one the new mechanics introduced in Shards of Infinity and I’ll cover that a little later. Players will develop stronger decks, attack each other, and generate Mastery to defeat their opponent/s. To win the game, you can kill your opponent or reach level 30 Mastery to release the full power of the Shard of Infinity.

A Struggle for Power

Each player receives a Character Card and a starting deck of 10 cards. Seven cards are gems, which are used to purchase cards. One Blaster card, which is the attack card. You receive one Shard Reactor card, which generates more gems as you gain more Mastery. The final card of your initial deck is the Infinity Shard. The Infinity Shard gains attack power as your Mastery level rises. Mastery builds by playing cards and activating their effects or spending one gem to increase your Character’s level by one. What is Mastery? Thematically speaking, it’s your character way of increasing the power of their Infinity Shard, so they can unleash its full power. When a player reaches the max of 30 Mastery and they play this card, the infinity attack power is unleashed and the game is over. The Mastery level also increases the power of other cards. Depending on the level shown on the white strip of some cards, the player will receive the more buffed attack power, defense, or health benefit if they meet or exceed the level required. I love this mechanic because it adds just enough twist to the game play and it forces players to put pressure on each other. I played this game four player for my first playthrough. I realized that having a Mastery level around 10 or 15 and paired with the right deck, could make a multiplayer game go very quickly or too long. Shards of Infinity is all about combat and a lot less about being defensive…..for now.

Deck Building With A Twist

A round of play has three phases. In the Play Phase, you will buy new cards, play card effects from your hand and activate cards in play from previous rounds. You can tap your Champion cards for their effects and even chain powers from other cards already in play. Just like most deck building games, players will buy new cards by paying their cost in gems and placing them in their discard pile. There is a little bit of strategy to buying cards. When a card is purchased from the center row (I call it market), another one is placed to fill the space immediately. Why is this important? You want to spend all your gems on a turn because everything gets discarded at the end of your turn. For example, if a player has two gems left and the next card that’s flipped is a cheap Mercenary card or just a cheap Ally, now there’s an opportunity to buy one more card. The basics strategies of deck building remain in Shards of Infinity. You want to get better cards, find types of cards that create synergy with others, and take out your opponent. The card play is what separates Shards of Infinity from Ascension. I should elaborate a little on card the types so you get an understanding how they work to a players benefit.

Ally cards are played from your hand and create combos as you match specific faction requirements. For instance, Undergrowth cards have a healing effect called Unify, which is triggered by having other Undergrowth cards in your hand or in play. Each faction type has their own offensive, defensive or buff benefits that create synergy in your deck.

Champions are the generators of offense and defense for each player. They don’t block incoming damage from your character, but they do have their own health. In my first couple games, I barely paid attention to other players’ Champion cards because I was so worried about my own. The number of gems and attack power they can create each turn, forces everyone to take them out instead of pounding away at your character’s health. You can’t allow them to stick around if you stand a chance in a bigger multiplayer game. To active their power each round, turn them sideways and to show they were used and they refresh when your next turn begins. 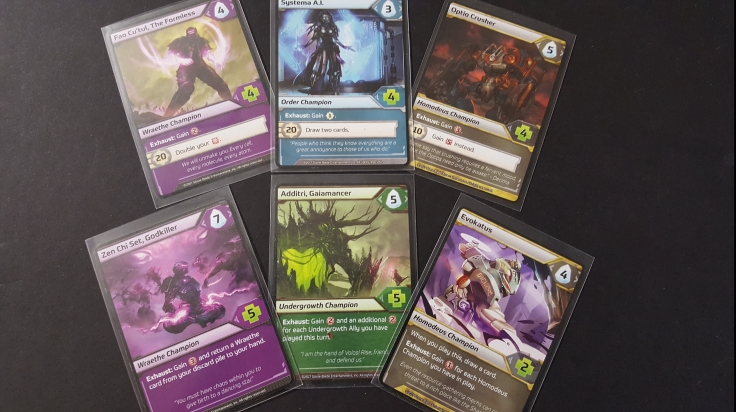 Mercenaries are the game changer that separates Shards of Infinity from the group of deck builders on the market. After they are purchased, they can be fast played for their effect immediately after purchasing them. They are placed under the center row deck and no Mercenaries can be played by the acting player for fast play for the rest of their turn. Sorry no spamming. They’re also like Ally Cards and some can contribute to buffing the effects of other cards. You also have the option of paying and adding them to your deck and playing them in future rounds. Playing a Mercenary cards at the right time can put a lot of pressure on your opponent. They also speed the gameplay up because they combo so well with other cards. Overall, they are heavy on attacking the opponent and awarding a good chunk of Mastery levels

In the Attack Phase, players can assign damage to all players or one specific target as they see fit. All damage is direct and the distribution is up to the attacker. Now, some Ally cards have a defense symbol. When a player dishes out damage towards anyone, a player can show one or more cards with defense from their hand to prevent the incoming the attack. You could potentially block the whole attack or lessen the blow. I don’t think I’ve seen this little detail in any game before.

In the End Phase is refreshing your hand to five cards and discarding everything that was played. Fast played cards, all Ally cards in play, and unused cards from your hand go to your discard pile. Champions and the Character card all stay in play and you draw back up to give cards. Once again, play continues until one player is left standing. The game could end by knocking out opponents or playing the Infinity Shard card after reaching a Mastery level of 30.

What’s So Cool About Shards of Infinity?

The Mercenary cards add a level of strategy that leads to opportunistic play. It feels reward to pull off combos with a well time Mercenary card popping up.

The art is incredible. I like action I see on certain cards and the overall dark theme.

The multiplayer is ok, but I’m still not sold on this as a free for all 4-player game

After playing one game, you will want more content right away, which is good and bad

Shards of Infinity is definitely a keeper for me. If you’re a fan of deck builders or this is your first deck builder card battle game, try this one. I think Shards of Infinity is the next evolutionary step after Ascension and Star Realms. There are similarities and that should be a good thing, but the couple differences in Shards of Infinity make me feel like this is a superior product. Now the question is why? I like the mastery mechanic even though I have yet to see someone reach level 30 and end the game. I would like to see this mechanic more developed and I think an expansion with some asymmetric characters might be a way to help players reach level 30 in different ways.  I also like the little defense mechanic cause it’s a hidden hand tactics makes all players pay attention to what others are buying and playing during off turns. The defense mechanic could make tournament play really interesting, if that happens. The most innovative to me is the Mercenaries, which make the whole experience unpredictable. I’m a pretty aggressive and less strategic player, so Mercenary cards play right into my style. That does NOT mean I win most games. Overall, Shards of Infinity makes me want more of Shards of Infinity. I understand why games in this genre make players race to stores for each expansion.  If the expansions keep rolling out expansions at a good pace, I believe Shards of Infinity will become the new leader of the genre. I hope this was informative and thank you for your time.

If you have any question or comments please let me know. I especially need feedback on the video I added. I’m trying to pepper in some video for people who favor videos.

9 thoughts on “Review: Shards of Infinity”